An awareness programme on climate change was jointly organized by the Indian National Science Academy (INSA) Lucknow Chapter and the International Society of Environmental Botanists (ISEB) at the NBRI auditorium on Thursday, 19 July 2007.
Dr. Nitya Anand, former Director, Central Drug Research Institute, Lucknow was the chief guest. On this occasion, a debate competition on “Global Climate Change” among the school children was organized with an aim to educate and sensitize the students of the dangers posed by the climate change brought about by human's activities on the planet earth. 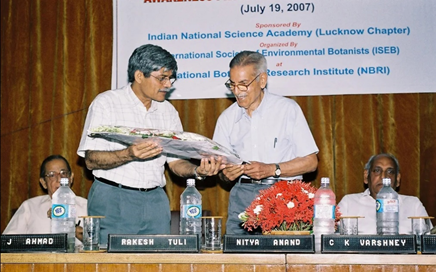 Dr. Rakesh Tuli, Convener INSA Lucknow Chapter and President, ISEB, while welcoming the chief guest Dr. Nitya Anand, stressed the need to make concerted efforts towards creating awareness regarding protection of environment and conservation of biodiversity. “The consequences of climate change are far reaching and this is clearly visible in the reduction of crop yields to the tune of 10-20% for an increase of 1ºC in temperature. About 1 percent of the nation's GDP is devoted to mitigate the effects of climate change”, said Dr. Tuli. He further added that with every 1ºC rise in temperature, the production of rice and other crops would decrease by 10%.
The Secretary of ISEB, Dr. K.J. Ahmad in his opening remarks appraised the gathering about the ongoing activities of the Society. He emphasized the fact that the degradation of planet earth was the result of over-exploitation of its natural resources by the people of present generation. 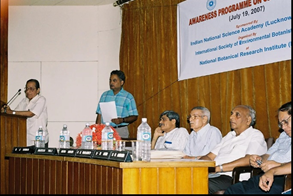 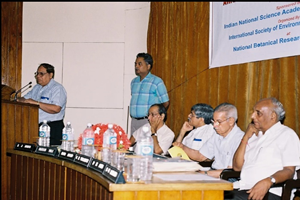 In his thought-provoking address, the chief guest, Dr. Nitya Anand said that there is a delicate balance between the biotic and the abiotic components of the environment, which we should not disturb and make a serious effort to live in harmony with the nature. An inquisitive mind, especially towards the working of the ecosystem and its components, among young children, would create greater awareness and help in protecting the environment. He further added that the need to preserve the environment from greenhouse gases is no more a theoretical consideration but the degradation, even in our country, has started taking its toll. Like (1) the Gangotri, Jamnotri and many other glaciers of the Himalayas have been receding by metres every year. This means that these glaciers are shrinking fast and rivers fed by them would stop being perennial; (2) The Sagar island, off the coast of West Bengal, has lost 70 square kilometers of its land mass to the rising sea rendering thousands of people homeless; (3) The rising sea has caused the rivers of the Sundarbans to swell and erode banks, mangrove forests of the Sunderbans and, thereafter, Kolkata would not last much longer; (4) Not unheard of is the melting away of the sacred Amar Nath Shiv Lingam.
Unless we start taking immediate steps it may be too late to act to preserve our environment to secure healthy life for the future generations. Dr. Anand stressed the need for a sense of inter-connectivity between all that exists in the universe whether living or non-living and the need to conserve it.

The CEO, Biotechnology Park, Lucknow, Prof. P.K. Seth shed light on the burning issue of climate change. He said that gene “loaded the gun” while “the environment triggers it”. “We have to continuously question ourselves what will happen and how will it happen? Even though Tsunami destroyed many coast lines, there are72 million people who stay on the coast lines in China and 71 million in Bangladesh”, Prof. Seth said.
Prof. C.K. Varshney, former Dean, School of Environmental Science, Jawaharlal Nehru University, New Delhi delivered a very interesting and thought-provoking lecture on “Global Climate Change” , which was thoroughly enjoyed by one and all. He said that climate change is a complex and rapidly advancing catastrophe with long-term consequences. He added that he was very happy to be able to speak to the school children about climate change, as it is the future generations who will face this real challenge. He emphasized that an increase in green house gases emission is a major fact behind global warming. Industrialization and consumer-driven culture are major factors, and developed countries like the USA, the UK and Germany are major contributors of greenhouse emissions.
He said that one could not in any way disconnect oneself with the environment. The environment is something we are always with and the children today are bound to face the impact of the approaching catastrophe in years to come. Describing the various causes of climate change, he said that human influence had a profound impact on global climate change. Going into the mechanism of global warming, Prof. Varshney explained that the CO2 present in the environment absorbs the infra-red radiation emitted from the Sun which causes the temperature of the earth to rise. We should try to follow techniques, which will decrease the production of CO2 and other such harmful gases. One of the major causes for the rise in earth's temperature is deforestation the cutting down of the majestic trees to expand the contour of the town. He said that every decade the earth's temperature is increasing by 0.5ºC and if it continues to do so, then the earth's temperature is likely to rise by 5ºC in the next 100 years. This will adversely affect the yield of rice. The global response to these challenges needs to move with much determination at all levels global, national and local, by countries and communities as well as corporations and individual citizens across both the developed and developing world. 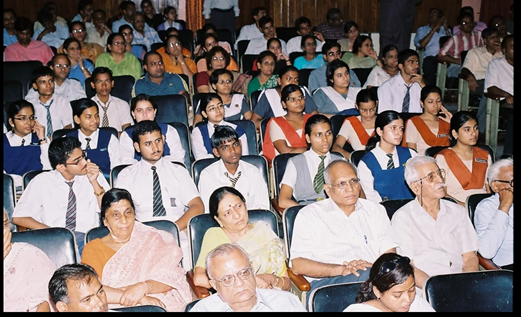 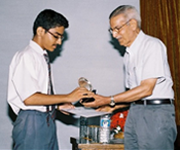 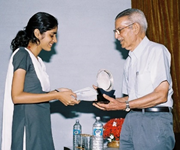 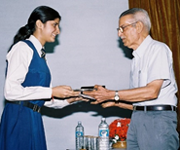 Dr. S.K.S. Rathore, Scientist NBRI, compeered the function, while Dr. S.C. Sharma, Vice President ISEB, proposed a vote of thanks. The function was attended by leading scientists of Lucknow including many distinguished fellows of Indian National Science Academy, eminent citizens and a large number of children from various schools in the city. The debate competition provided the right kind of stimulus to nurture and sustain the interest of not only the young minds to invest all their efforts in protecting the environment but also to their parents and teachers about the importance of this vulnerable topic in national as well as global scenario. This would provide a kind of platform for future generations of the country. It ended with the hope that teachers and parents shall also work as master trainer.