22nd Foundation Day of International Society of Environmental Botanists (ISEB) was celebrated on 22 December 2016 at CSIR-NBRI Auditorium. On this occasion a programme was organized by International Society of Environmental Botanists (ISEB) in which Prof. (Dr.) Gourdas Choudhuri, Executive Director & Head, Department of Gastro-enterology & Hepato-biliary Sciences, Fortis Medical Institute, Gurugram, Haryana was the Chief Guest. Prof. S.K. Barik, President, ISEB and Director, CSIR-NBRI presided over the function.
At the beginning of the programme Dr. K.J. Ahmad made a brief historical account of the ISEB and its contribution during the past 22 years. ISEB was founded on 3rd December 1994 with just 28 members which has now increased to 450 members both from India as well as abroad. He informed that till date total 88 issues of ENVIRONEWS have been published by the ISEB. ISEB has organized 5 International conferences (ICPEP), where more than 100 overseas delegates were also the participants. The ISEB has been organizing many outreach activities for environmental awareness. He felt proud to declare that very reputed members are associated with the ISEB such as VCs of universities, directors of institutes, professors and faculty of universities, judges, environmentalists etc.

After that, the second issue of “International Journal of Plants & Environment”, a journal of ISEB, was released jointly by Prof. S.K. Barik and Prof. G. Chaudhuri. Along with them Prof. R.S. Tripathi, Dr. K.J. Ahamd, Dr. S.C. Sharma, Dr. R.D. Tripathi (Chief Editor of the Journal) and Dr. Nandita Singh (Co-Chief Editor of the journal) were also on dais. It was followed by a brief introduction of Prof. S.K. Barik, President ISEB and Director CSIR-NBRI by Prof. R.S. Tripathi. He emphasized that Dr. Barik has been leading a strong group of research at NEHU pursuing frontline research in diverse areas such as plant diversity including inventorization, bio-prospection, conservation of threatened species, ecological modeling, eco-restoration of degraded ecosystems, climate change, regeneration of forests etc. Prof. Barik has published > 70 research publications and 11 books as an author, which are cited extensively world-wide. He has been serving as Chairman/Member of several Expert Committees/Task Forces constituted by Ministry of Environment, Forests and Climate Change (MoEFCC), Planning Commission, Department of Biotechnology (DBT) etc. At the end Prof. R.S. Tripathi wished him good luck for the future.

Following this Dr. S.C. Sharma, Vice-President of ISEB, introduced the Chief Guest, Dr. Gourdas Choudhuri, as a leading gastroenterologist, medical educator, researcher and columnist of national eminence, with rich experience of over 30 years in the medical profession. He is currently Director and HoD, Gastroenterology & Hepatobiliary Sciences, at Fortis Memorial Research Institute in Gurgaon. He also told that over the years, Dr. Choudhuri has been widely recognized in his field and was the recipient of several honours and awards. Dr. Choudhuri has served as Council member of international bodies such as the World Gastroenterology Organization (WGO), Asia Pacific Association of Gastroenterology (APAGE) and Coalition for Eradication of Viral Hepatitis from Asia Pacific (CEVHAP). He has also been a Fellow of the World Health Organization (WHO) for Health Promotion. This was followed by foundation Day lecture by the Chief Guest, Dr. G. Choudhuri on the topic “Environmental Effect on Human Health – Searching for local solutions”. During the presentation Dr. Choudhuri started with the Microbial age 1879-1990, when most research was focused on microbes and disease. 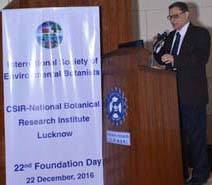 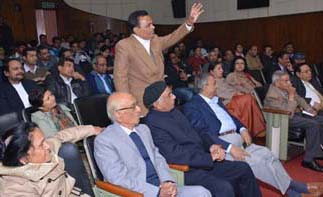 Then he asked the audience what were the major causes of death in India? As a reply he answered himself that Heart disease, malignancy and stroke were the main causes of death. He said that about 65% of deaths are non-microbial in India. Then he told that after Microbial phase came the Genomic phase for health and diseases. According to him some diseases are purely genetic diseases for example Retinoblastoma, Huntington's disease but many genetic disorders result from gene changes within the body due to inborn errors of metabolism. After Genomics he shifted the attention to Environment and Health. He said that Pollution was the major cause of many diseases. Some pollutants may be natural cause of disease like cholera and arsenic toxicities, whereas some may be due to consequences of human habitation like global warming, natural disasters. Further major causes are the man made pollutants which are causing serious diseases these days. He gave the example of air pollution caused by burning of crops etc. which has been cause of many respiratory diseases in cities of North India this winter. He said that type of environment is very necessary for living beings. This also includes the internal environment which cause diseases like Schizophrenia and depression. In a healthy environment people feel happy and happy persons live longer. Dr. Choudhuri emphasized that the balance in lifestyle may cure a number of health problems. He also gave a glimpse of the importance to plants in mitigating the pollution and keeping the environment healthy. In the end Dr. Choudhuri introduced the audience about his non-profit organization “HOPE Initiative” which aims at creating awareness on health and environment related issues in students and tries to reach out to the community through the school-to-community approach.

This was followed by Presidential remarks by Dr. Barik. He thanked Dr. Choudhuri for his very informative presentation. He also agreed that maximum environmental problems can be resolved by plants. He said that every person should do plantation and promote others to do so. Dr. Barik emphasized on collaborative research through which we could get good technology and products. As a token of love from CSIR-NBRI, Dr. Barik presented a plant based memento to Dr. G. Choudhuri. The programme was conducted very diligently by Dr. Seema Mishra. The Foundation Day celebration was capped off with the Vote of thanks by Dr. R.D. Tripathi, Additional Secretary ISEB.