Webinar on on Air Pollution and Climate Change

Home /Webinar on on Air Pollution and Climate Change

Webinar on on Air Pollution and Climate Change 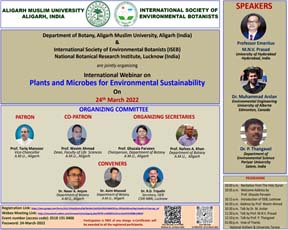 A one day National Webinar on “Air Pollution and Climate Change” was organized by ISEB in collaboration with CSIR-NBRI and National Institute of Disaster Management (NIDM), New Delhi on 21stOctober, 2021.

Dr. Kopal Verma, Junior Consultant, NIDM, moderator and coordinator of the webinar, welcomed all the distinguished panelists and participants to the webinar. She gave a brief introduction about the Environment, Climate and Disaster Risk Management Division of National Institute of Disaster Management.

Prof. (Dr.) Anil K Gupta delivered the welcome address of the webinar and invited all the eminent panelists. He congratulated ISEB for taking up such a pertinent topic for this webinar. He pointed out the global recognition that ISEB, CSIR-NBRI has attained with its contribution in the field of environmental botany, environmental sciences, air pollution, etc. He mentioned that air pollution has become a well-known subject now and in spite of the fact that we have been discussing various mitigation issues for four decades, newer dimensions are being added to it and now it has become a subject of emergency management. He recalled the declaration of health emergency in Delhi of 2019 and governments’ various efforts to curb this problem like odd-even traffic, students on redlights with placards making people aware about turning off their engines, etc. In fact, the current period of pandemic has put the dimension of health in the forefront of any kind of sustainable development, as it is the real asset to be acquired by human beings. He also mentioned that not only transportation and industrial sites are contributing to the air pollution but also factors like natural dust and crop burning. He finally said that as the issue of air pollution is being advocated as a new kind of disaster, this webinar is going to contribute to everyone’s level of understanding and level of knowledge on the subject. 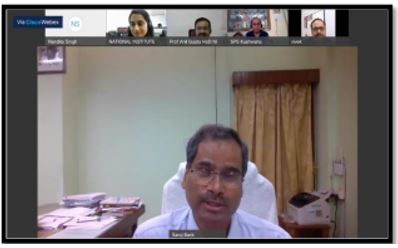 Prof. S.K. Barik, Director, CSIR-NBRI & CSIR-IITR, Lucknow and President, ISEB complemented the entire coordinating team for implementing this theme of air pollution and climate change and organizing this webinar. He mentioned that there are two dimensions to air pollution and climate change. CSIR-NBRI looks into various research aspects of mitigation and adaptation approaches for climate change as well as reduction strategies for emissions of air pollutants. ISEB is the organization which helps in mainstreaming this research into policy formulation for developmental planning. He briefly mentioned about the ISEB. He mentioned about the implementation of an educational program after devising the curriculum for environmental education and particularly dealing with the air pollution tolerant plants and climate change adaptive plants. Then, devising the minimum possible scientific robust method which a college level infrastructure can develop. A very simplified index is being developed which can screen the plants depending upon the different ranges of their pollutant absorption capability. With this webinar, there will be an effort to highlight the issues with common man and scientific fraternity as well as with the policy framework. 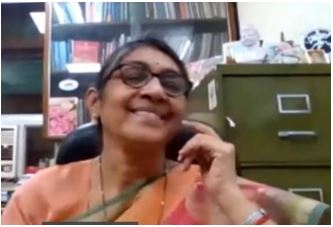 About the speaker : Prof. Madhoolika Agrawal, is Dean, Faculty of Science, Professor of Botany and Coordinator, Interdisciplinary School of Life Science at Banaras Hindu University, Varanasi, India. She obtained her M.Sc. with gold medal and Ph.D degree in Botany from BHU. She has joined BHU in 1984 as Lecturer, became Reader in 1991 and Professor in 1999. Dr. Agrawal has made significant contribution in the field of air, water and soil pollution and global climatic change effects, with particular emphasis on the cause effect relationship of plant stress interaction. Dr. Agrawal has extended her research work on global climatic change effects with particular reference to enhanced ultraviolet- B radiation and elevated O3 and CO2. Dr. Agrawal is a recipient of many national and international scholarships, fellowships, awards and recognitions. She is fellow of Indian National Science Academy (INSA), National Academy of Sciences, India (NASI), National Academy of Agricultural Sciences, India (NAAS), and International Society of Environmental Botanists (ISEB) . She has worked on 12 projects of Government of India and 5 International projects. She has contributed in UNEP report on atmospheric brown cloud and many others.

Prof. Agarwal delivered her lecture on Tropospheric Ozone: A cause of concern for the terrestrial plants. She mentioned that the effect of ozone gas was first noticed on the rubber plants. A decade ago, the concentration of ozone was not high all over the world but now it's increasing gradually. Ozone is a special molecule but it is an air pollutant in the troposphere. It is a friendly gas which protects us from harmful ultraviolet radiation when it is present in the stratosphere. Tropospheric Ozone helps to regulate the climate as well as the regional air quality because ozone helps in the oxidation of water and hydroxyl ions are the natural cleansing agent in the atmosphere.

So various pollutant gases that are being emitted into the atmosphere are reacting with hydroxy ion and gets converted into a different compound. Ozone is a short-lived Greenhouse gas which contributes 8 to 15% to the total radiative forcing as a Greenhouse gas. This implies that if the troposphere Ozone is increasing it is not only causing impact on biological organisms or climate or air quality but it is also helping in the warming up there because its global warming potential is almost 2,000 times more than that of the carbon dioxide gas. Ozone is made in the atmosphere and it is not directly emitted into the atmosphere which is why it is a secondary air pollutant.

Prof Agrawal explained the effect of elevated ozone, which is an important phytotoxicant and greenhouse gas, having serious consequences for terrestrial plants. She discussed the negative impact of ozone on crop yield. Leaf injury symptoms, mechanism of ozone toxicity in plants and different defense mechanisms adopted by the plants. She stated that whatever strategy plants employ against O3, there is some yield penalty. Prof Agrawal also presented the results of her field experiments to screen tolerant wheat cultivars showing differential responses. She also showed that by employing different management practices, like nutrient application, crop mixing or use of biochar, the negative impact of O3 can be lessened.

About the speaker: Prof. S.P.S. Kushwaha, Former Group Director, Dean (Academics), and Head, Forestry and Ecology Department of Indian Institute of Remote Sensing, ISRO is the one who developed techniques to monitor India’s forests using satellite imagery as early as 1982. The technology was transferred to Forest Survey of India for regular forest monitoring. He also developed methods for sustainable watershed level development planning, which is popular among Indian farmers. He advanced the research on wildlife habitat modeling and evaluated habitats of several animal species. He has significantly contributed in development of indigenous technology for nationwide biodiversity characterization. This ESRI GIS Innovation Award winning research helped in nationwide biodiversity characterization. He has unique distinction of installing and running three C-flux monitoring towers at Betul, Doon Valley and Haldwani for the first time in India. He is the only ecologist in the country who has effectively used space technology for natural resources assessment, monitoring and conservation. In recognition of his research work, Prof. Kushwaha was awarded prestigious Alexander von Humboldt Fellowship of Germany in 1992, elected as Fellow of National Academy of Sciences, India (NASI),Fellow of International Society of Environmental Botanists (ISEB), Fellow of Indian Society of Remote Sensing (ISRS). His contribution in forestry, ecology and remote sensing disciplines is outstanding.

Prof. S.P.S. Kushwaha delivered his lecture on Remote Sensing in Environmental Monitoring. He mentioned that remote sensing is basically getting information without being in physical contact and then briefly explained how the data is generated with the help of remote sensing. The data obtained by remote sensing has wide range of applications for viz. aeronautics, meteorology, aerospace engineering, air pollution scientists, etc.
India currently has 56 satellites. More than 1000 launch vehicles have been tested in India. India ranks position 6th in the nations with highest numbers of satellites currently orbiting the Earth. There are 24 ground stations all across the world for receiving IRS data. With the progression of time the precision and resolution of satellites is increasing.

ISRO has developed so many models to predict meteorological events, climatological events as well as the predictions related to the future of forests. In agriculture, the predictions can be made as to which crop is to be grown in which season. Leaf area index is provided through remote sensing for all green vegetation which further measures the productivity of the crops. With the help of case study of north east India, he explained the application of remote sensing for monitoring shifting cultivation, forest cover, disturbance regimes, plant richness, Tsunami Impact Assessment, drought monitoring, aerosol monitoring, etc. Lastly, he briefly explained about the Biodiversity Information System (BIS).

Prof. Anil Kumar Gupta, Professor & Head, ECDRM Division, NIDM gave the closing remarks and summarized the webinar. He mentioned that both the speakers provided and excellent account of information based on their own research. This webinar proved to be very rich in terms of the aspects covered in this programme. He also mentioned the important contribution of Dr. Nandita Singh and Dr. Vivek Pandey for the success of this webinar.

The webinar was a success as more than 200 participants, including students, teachers, scientists, technocrats attended the webinar.

Dr. Kopal Verma, Moderator and coordinator on behalf of NIDM as well as ISEB gave the formal vote of thanks to all the dignitaries, participants and the individuals who were directly or indirectly involved in the coordination of the webinar. She thanked faculty members and students for joining and patiently listening. She showed gratitude towards Prof. Madhoolika Agarwal and Prof. S. P. S. Kushwaha for taking out their precious time to deliver lecture in the webinar. She extended her sincere thanks to Prof. Anil K Gupta and Maj. Gen. Manoj Kumar Bindal from NIDM and to Prof. S. K. Barik and Dr. Rudra Tripathi for their constant guidance, directions and support. She also thanked Dr. Vivek Pandey and Dr. Nandita Singh for their smooth coordination.

Please find the YouTube link of the webinar below:
https://www.youtube.com/watch?v=XCUqSXUTXb8